You are here: Home › Chute Release for Rocketry Ready for Testing
By John Beans on September 17, 2015 in News

Those of you who have heard me talk at the National Association of Rocketry annual meetings know that Jolly Logic has been developing a parachute deployment product for model rocketry which gives you control over when your parachute opens. (If you are into rocketry and you’re curious about what we’re working on, the most recent talk at Cape Canaveral gives a good peek into our rocketry product roadmap.)

This week we reached the flight test stage of the parachute deployment product, which we are calling Chute Release.

Chute Release aims to address a couple of issues for rocketry:

The traditional answers to “my rocket goes too high and drifts too far” (or my field is too small) are either to use a smaller chute, or to move to dual deployment. With smaller chutes you run the risk of damaging your rocket on landing. With dual deployment you need to build a more complicated rocket that uses an electronic controller to set off explosive charges that deploy the parachute at a lower altitude, rather than high up at apogee. There has to be a better way, right?

Chute Release lets you choose when you want your chute to open, even for simple rockets with basic motor ejection. It works by holding your chute closed with a stretchy band until your preset altitude is reached, then it lets the parachute open. 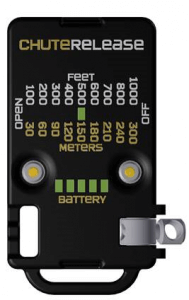 The working prototypes aren’t quite as nice looking. Here you can see that the 3D-printed case is transparent (so that we can see the internal parts moving while we test). The final version will be tough polycarbonate, while the metal parts will be aircraft aluminum: 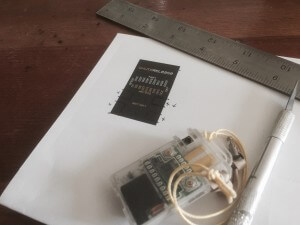 We printed and cut out a label to mark the altitude settings, then applied it to the front face of the release. 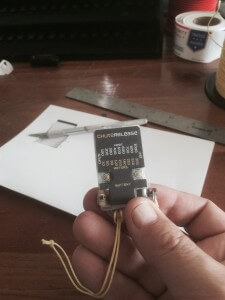 Which doesn’t look too bad. Good enough for testing.

Chute Release is designed to be extremely easy to use. As a first step, you attach the tether to one of the parachute shroud lines (so that you don’t lose your Chute Release). Then, you gather the bottom of your parachute together and wrap the band around it and snap the pin into the other side of chute release. That holds your parachute closed until you want it to open. Then you use the buttons to set an altitude. You can pack your chute however you like after that, including rolling it up.

Chute Release includes a “ground test” feature. This lets you open it on the ground, and it includes a 5-second delay to let you arrange it or tug on it as you see fit before it opens.

It will be fun to experiment with different ways to use Chute Release. For instance, you can wrap the bottom of your chute and leave the top part of the chute free as a streamer/drogue to slow the descent a bit and to keep the parachute lines and shock cord in nice vertical “stack” (as shown in the video).  Or you could bundle your parachute into one nice tidy small package with Chute Release holding it together.

Here is Chute Release being tested in Jolly Logic’s vacuum chamber. This particular test (100 ft) is the lowest one and the final test run. You can see and hear Chute Release letting go of the pin as the altitude on AltimeterOne (in realtime mode) passes 100 ft.

A nice benefit of Chute Release is that you can use a larger chute than you normally would. You can choose your chute to give a soft landing without worrying as much about how far it will drift on winds aloft. We thought about calling this product “HALO,” after the skydiving term which means “high altitude, low opening,” but then we’d have to explain what that meant…

The max altitude is essentially unlimited (it only cares about the lower 1000 feet or so), and acceleration should not be a limiting factor (short of breaking the electronics or causing a wire to pull out).

You can daisy chain two Chute Releases together around the chute (each snapping into the other) to be redundant (if either opens, the chute deploys).

It won’t fit in every rocket. Practically speaking, the smallest rocket tube that it will fit will be the 41mm (1.64″) BT-60 (Big Bertha) size tubes, and perhaps the international 40mm FAI size. We’ll test in a 38mm rocket, we know there’s great interest from the high-altitude crowd for that. Unless/until we can design a smaller Chute Release, we’ll market this as more of a medium-to-high power product, for motors F-K, since that’s a range that reaches higher altitudes and still usually relies on simple motor ejection. 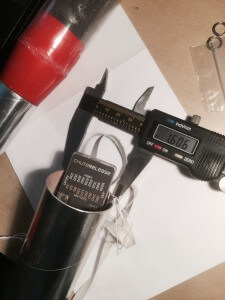 In case you’re wondering how big of a difference Chute Release can potentially make, let’s look at some computer-simulated flights.

In a slightly breezy, 8-14 MPH wind we set up two simulations: one in which the parachute comes out at ejection, and another in which it doesn’t open until 200 feet.

Here are the flight settings for a flight without Chute Release: 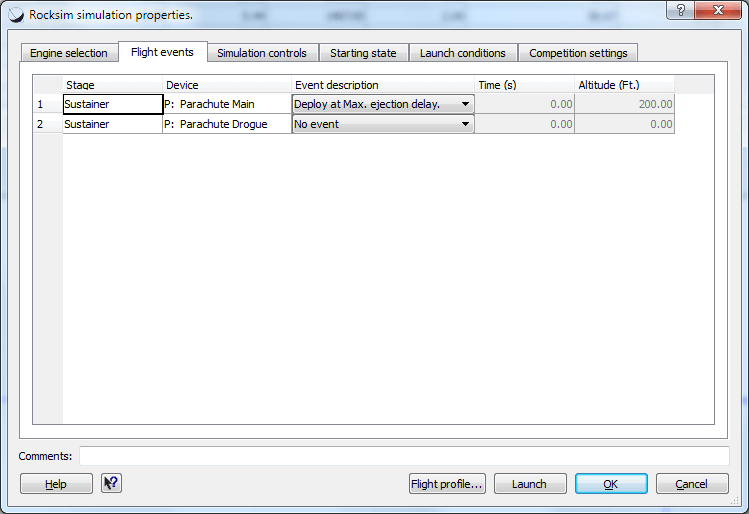 Here is the trajectory of that flight: 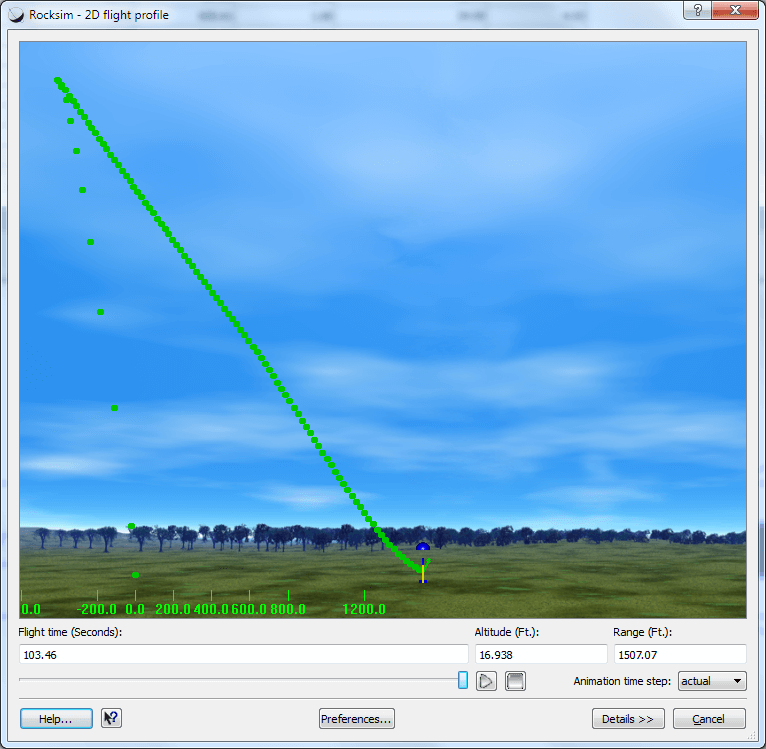 Notice the “range” of the flight.  In this simulation, we would have needed to walk 1507 feet to retrieve our rocket.

Now we model the flight with Chute Release. Here are the settings: 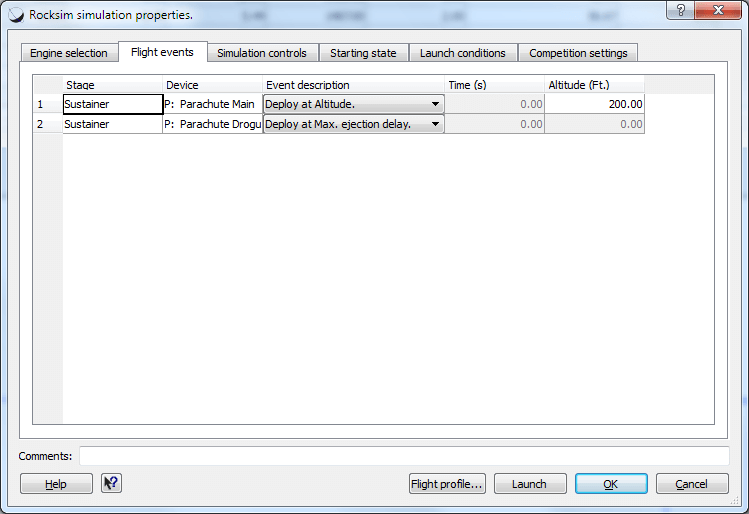 Before the main chute opens at 200 feet, we’ve modeled the falling of the rocket as if it was riding on a tiny 8 inch chute. That’s to approximate the rate at which the rocket would fall as it tumbles with the parachute being held.

Here is the flight trajectory: 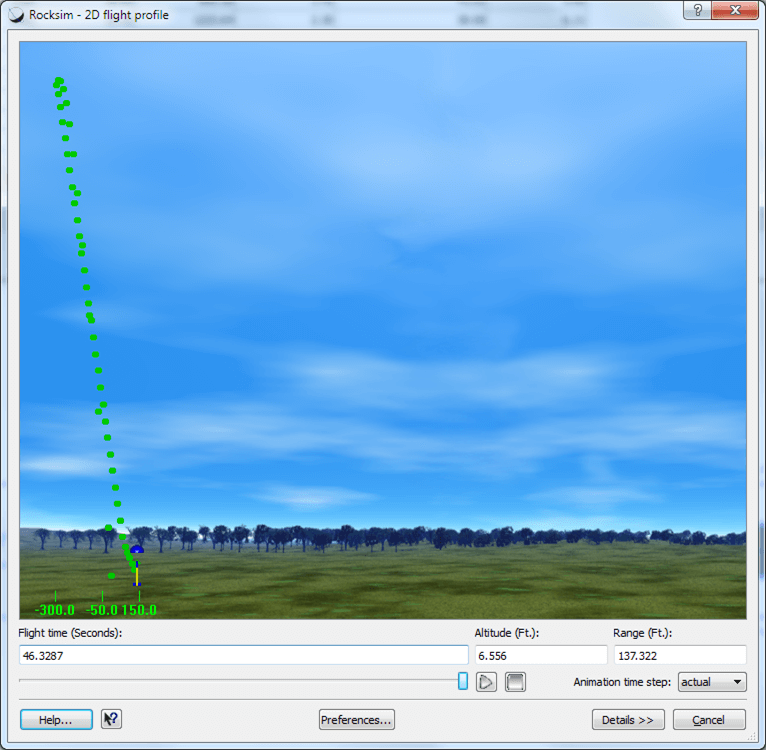 This time our walk has been shortened to 137 feet, making it much easier and much likely that we can easily find our rocket.

We also ran the simulation in heavier wind, and here are the results:

We’ll post updates after testing. Let us know if you have any thoughts or questions on Chute Release at info@jollylogic.com.