Chute Release lets you control the altitude your parachute opens.
For model rocketry.

Chute Release is a small electronic device that holds your rocket parachute closed until it drops to an altitude that you choose. This is great for windy days and small fields when normally your rocket would drift too far while descending under parachute.

Simply wrap the elastic around your folded parachute and snap it into the other side of the release, then set the altitude from 100 to 1000 feet (30-300 meters) and you are ready for launch.

See the Videos tab above for flight videos!

How Does It Work?

Chute Release uses an elastic band which wraps around the parachute and has a pin which snaps in place on the other side of Chute Release. Chute Release can sense altitude using a highly accurate atmospheric pressure sensor. When the rocket descends to the chosen altitude, an electronic servo releases the pin and lets the parachute open. Chute Release is powered by a built-in rechargeable battery that can be recharged from any USB port (cable included).

Chute Release is constructed of incredibly strong polycarbonate plastic to stand up to ejection charges and impacts. The mechanicals are constructed of precisely-machined aircraft aluminum, Teflon coated so that they need no lubrication.

How to Use It 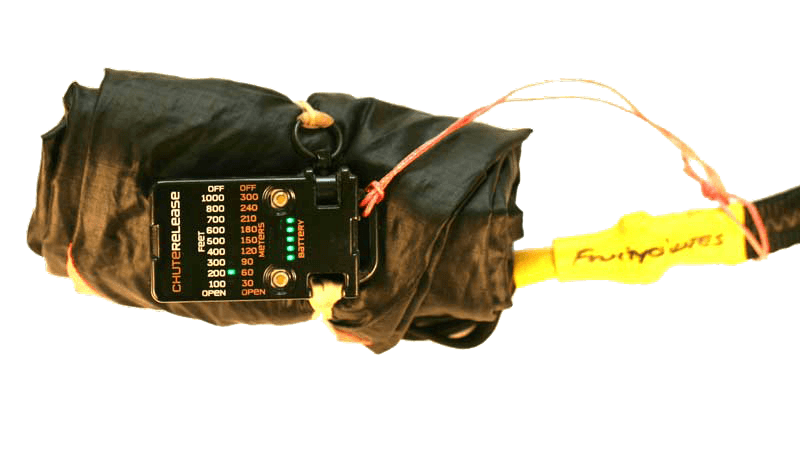 Your parachute is ejected at the top of your flight as usual by your motor’s ejection charge, but Chute Release holds your parachute closed until your rocket falls to the altitude that you chose as the release altitude.

Here is how you set the release altitude on Chute Release, and perform an easy ground test:

Shown below is a typical flight recorded by an AltimeterThree which was riding along in the rocket. You can see from the altitude graph that the flight reached 880 feet and then fell until Chute Release released the parachute at 200 feet. Notice that it took about 50 feet after release for this parachute to fully open and slow the rocket to final landing speed which it reached at about 150 feet above the ground.

It typically takes 50 to 150 feet (15-45 meters) to slow your rocket to landing speed, but this depends very much on how your fold your chute. An instrument like AltimeterThree is a valuable tool for examining and improving your techniques, because it shows clearly what happened during flight.

Interesting fact: the release altitude does not affect the landing speed. In other words, imagine a rocket that opens its main chute at 800 feet on one flight, then 200 feet on the next flight. Both flights will land at the same speed. In both cases, the rocket quickly slows to landing speed within a second or two of opening, then drifts at landing speed until it touches down. Higher release altitudes give you more time to spot your parachute, and sometimes you want the rocket to drift to a certain spot on your field to avoid obstacles. Lower release altitudes (once you are confident in your folding techniques) can reduce wind drift. 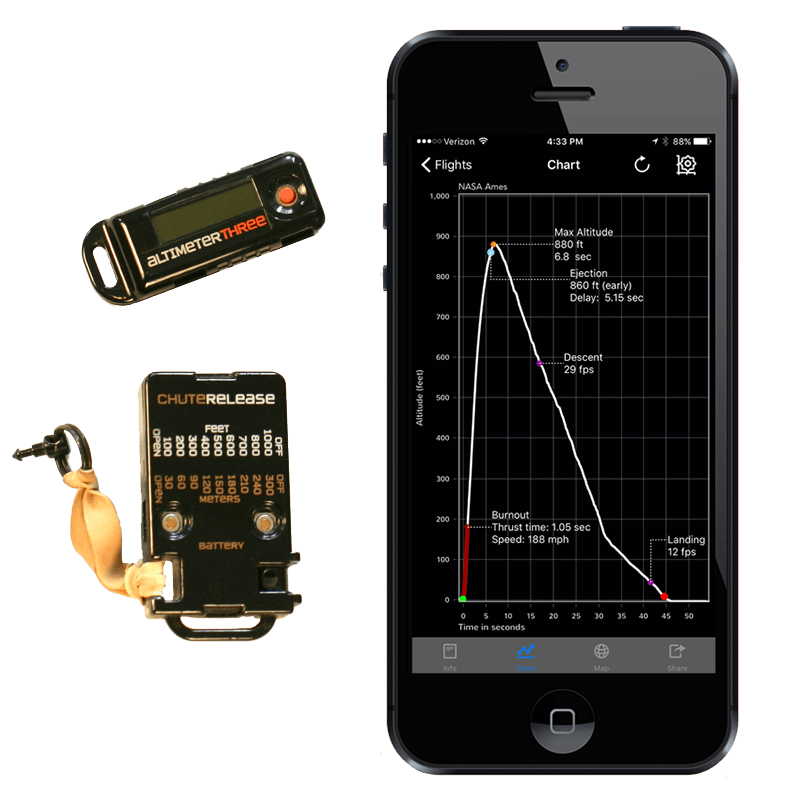 AltimeterThree recording of a flight with Chute Release set to 200 feet (60 meters).

Proper parachute folding and loading is always critical to a successful flight, and you probably already have a favorite technique. Chute Release introduces two new factors that you have to consider:

There is no “one way” to fold and pack your chute. It depends too much on the chute you’re using and the amount of space you have in your rocket. For instance, if you are packing your chute for a smaller rocket that is < 41 mm in diameter (such as a Big Bertha size rocket), you will not be able to wrap Chute Release around your entire parachute. Instead, you’ll have to just wrap it around the bottom of your chute, and then fold or roll the rest of your chute up outside of Chute Release.

You should experiment before you to go a launch, and practice packing and loading your rocket at home. For smaller rockets, load the chute and then see if you can eject it using your own breath by blowing in the engine mount.
Shown here is a video demonstrating a folding approach that wraps the parachute around the shroud lines to avoid tangling.

We’d love to see techniques you’ve developed. Share them with us at support@jollylogic.com.

Your Chute Release flashes its version number right at start up. First digit shows on battery gauge, second digit shows on altitude scale.
If you would like to have your firmware updated to the latest version, see our Support page for our mailing address.

See the Videos tab above for flight videos!

LOC Expeditor launched on a 54mm CTI I150 Blue Streak at Midwest Blast 2, April 23 2017. Great video with Chute Release being filmed during release.

10″ diameter rocket on K Motor set to release when rocket descended to 700 feet: