Bluetooth is a short-range wireless communications link. AltimeterThree uses it so that you can control AltimeterThree with your phone or tablet. Almost all phones and tablets have Bluetooth, though you may need to turn it on in Settings.

The range of Bluetooth varies depending on which way things are pointing and what’s in the way of the signals. But in general, it’s about 30 feet. As you use AltimeterThree during flying, you’ll lose connection as AltimeterThree flies away. That’s normal.

Helpful tip: some phones and tablets really don’t like Bluetooth connections that fade in and out as a flight begins. If you are having trouble reconnecting after flights, consider turning off Bluetooth right after you tell your altimeter to begin recording (it will continue recording). Then turn Bluetooth back on right before you reconnect to download your flight.

TIP  Frequently the fastest way to re-connect with your AltimeterThree is via your mobile device’s Settings>Bluetooth, rather than the app.

Before you can use your AltimeterThree with any phone or tablet, you’ll have to “pair” it. Pairing gives permission for the altimeter to communicate with your mobile device. Unless you “unpair” your altimeter, you only have to do this once.
Important: Your altimeter and your mobile device must BOTH give permission for pairing. In this process, you’re going to press a button on your altimeter AND your phone/tablet within 20 seconds of each other, and it’s important to do it in that order.

When you start a new recording, or use the Resetting feature, your previous flight will be erased. Be sure to connect and download each flight before starting the next one.

1. Turn on AltimeterThree (it should say it is searching)

2. On your mobile device, go to Settings > Bluetooth and turn Bluetooth ON

3. You should see a list of nearby Bluetooth devices (in Android™, you may need to press Search for Devices) 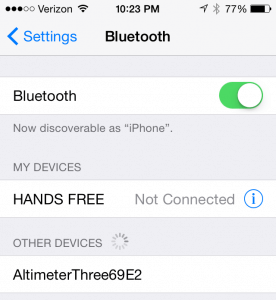 4. Click on the name of your altimeter in the list of “available” or “other” Bluetooth devices.
(If the altimeter is already in the top list of already-paired devices, you should go back up Starting Fresh.)
A dialog box will pop up (don’t click it yet!) and you will see a code on your altimeter.

5. Approve the pairing by CLICKING THE BUTTON ON YOUR ALTIMETER FIRST BEFORE CLICKING THE DIALOG ON YOUR MOBILE DEVICE within 20 seconds. The order that you press the buttons is important.

6. You should see a popup that asks for permission to pair. Click “Pair” AFTER clicking the button on your altimeter in step above. 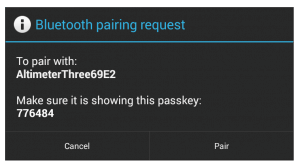 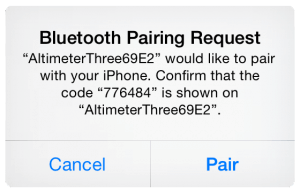 If pairing is successful, AltimeterThree will show that it is connected, and your phone/tablet will list it as one of your paired devices in Bluetooth Settings.

If for some reason you get “stuck” on a step, or pairing appears unsuccessful (one device says “Connected,” the other doesn’t), follow these steps to start over:

1. Hold down the button on the altimeter until it says “Resetting”
2. If your mobile device shows the altimeter as “paired”, click the “more info” link and unpair/forget it
3. Turn off Bluetooth on your phone/tablet, and start the Steps to Pair from the beginning.

Bluetooth connections/disconnections can confuse your phone and the app sometimes. AltimeterThree users have been helped by following this conservative connection approach:

This approach deliberately starts and stops the Bluetooth connection, rather than trusting the phone and altimeter to deal gracefully with the connection as your altimeter flies (or walks) in and out of range. Certain phones under certain conditions will decide that the connection is too unreliable, and will silently disable the connection to save power. At that point, regardless of whether either device thinks the connection is still operating, no data will flow. This procedure, while a little more inconvenient, may help with this problem.